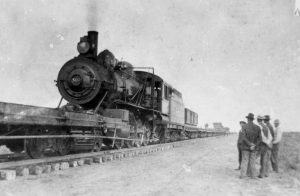 There were few settlers in this area before 1902. In 1903 the community began under the name 'Pleasant Ridge'. The Federal Government had surveyed the area, and the land was divided into sections and offered for homesteads. The name "Holden" was chosen in 1906 in recognition of the first local member of the new Alberta provincial legislature, the late Mr. J. B. Holden.

Once the railway was completed from Calgary to Edmonton, settlers started walking or riding horseback eastward from Wetaskiwin. These settlers came from eastern Canada, United States and Central Europe. The arrival of the Grand Trunk Pacific Railway, in 1909, opened up a whole new array of opportunities. Holden was formally incorporated as a village on April 14, 1909.

The Village is situated on fairly flat land, and enjoys a beautiful, big-sky prairie setting. Homes are well kept and residents take pride in their village and its heritage. Holden joined Communities in Bloom in 2007 to foster this community pride, beautification efforts, environmental awareness, and citizen involvement.

We invite you to 'Share The Charm of Country Living' and our friendly atmosphere any time of year.

Location:
95 kilometers (59 miles) SE of Edmonton on Highway #14; within Beaver County, and along the CN Railway mainline from Vancouver to Montreal

Soil/Fertility:
Black soil zone, mostly class 2. These soils are deep and hold moisture well. They produce a moderately-high yield for a wide range of crops. Soils in this zone are among the most fertile in the province, with 3 – 4 times as much nitrogen and organic matter in their surface foot as the average brown or grey wooded soil.

Local Government:
The Village of Holden elects five councillors. The mayor is selected by the council each year in October. The Village has three full-time employees and several seasonal positions.

Truck Transport:
Highway 9 Express, and others; Highway 14 has no load restrictions.

Freight:
CNR; Passenger: Via Rail services at Viking and Edmonton.